Jackson Square was the ceremonial plaza of the original city. It was the citizen’s space: the white citizen’s space. The “back” of the Vieux Carré, at the other end of Orleans Street from the Cathedral, was the point at which many slaves arrived in New Orleans, because it was easier to get a boat into Bayou St John than to bring one up the river; and the slaves, unlike most cargo, could walk the two mile portage into the city. Later, a second public square was developed where the old portage was replaced by the Carondelet Canal. This square was given over to black slaves and free people of color to gather for dances and celebrations on Sundays, and came to be called Congo Square, after one of the dances commonly performed there. The white square at the front of the Quarter, the black square at the back: one way that space in New Orleans has been differentiated by race. Only two major streets run north-south in New Orleans: Napoleon Avenue (bottom center of this image) and Elysian Fields (upper right). The yellow areas represent the portions of the grid of minor streets that are oriented to the cardinal points. Elsewhere in the city, the streets cannot orient you to true north at all. Yet no one thinks of Napoleon doing so, either; Elysian Fields perhaps. The single publicly recognized indicator of north in the city was the statue of Gen. Robert E. Lee at Lee Circle (here, below and slightly left of the French Quarter), who for decades gazed–defiantly or pensively, depending on your point of view–ever northward. The statue of Lee was removed in May of 2017. What this has to do with New Orleans won’t be immediately apparent. But what it illustrates is a fact of architectural design, which is that, when you are looking at a floorplan, it is pretty easy to imagine the front face of the building, but it’s not so easy to imagine the back face, because to do that, you would have to turn it around in your head. Which is why it is a good idea for architects to rotate their drawings on their desktops (actual or virtual) from time to time, to get an all-around understanding of what they’re doing.

These entries are samples from among approximately two hundred observations on the spatial character of New Orleans, which I’m preparing for publication in book form. A series of articles based on this material, published on Places:Design Observer, begins with “Stoop, Balcony, Pilot House: Making It Right in the Lower Ninth Ward.”

The most important sources for understanding the relation between topography and culture in New Orleans are:

Support New Orleans with your ears

The formality of Jackson Square—its symmetry and the cathedral’s frontality—doesn’t jive with our everyday experience of it. We don’t march up to the square on axis, but instead come from the side, along Chartres Street, walking from the streetcar and bus stops along Canal or Esplanade. But the order of the square is in our minds, anyhow.

The symmetry of the cathedral’s façade, obliquely viewed and opening onto light, suggests the presence of the square before the square itself is seen and lures us with a foretaste of arrival. Memory and anticipation accompany us in our experience of the city, the seen, the remembered, and the imagined, all intertwined.

In Then Up Then Out Again 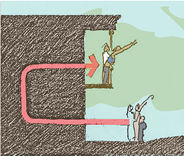 All the world’s a stage, but especially the balconies. Imagine it’s Mardi Gras day, and you are on St Charles Avenue, along the route of the Rex parade. Behind you and overhead, you hear laughter and loud talking, a party on the balcony of a house. One thing leads to another and pretty soon someone lets you in and brings you up a dark, curving stair, and you’re on the balcony yourself. All of a sudden you’re big friends and there’s plenty of beer and boiled shrimp.

Physically, you’ve ended up not so far from where you began, but the social gain is dramatic. Along with the beer and shrimp you get gossip about the Rex krewe and whichever Louisiana politician is (like the shrimp) in hot water today. And, while you’re still part of the audience, you’re now equally part of the show.

Knowledge and performance, initiation and display: these are no doubt terms of the social economy anywhere, but in few places are they dramatized like they are in New Orleans.

There must be some things about the spatial patterns of New Orleans that are different from the patterns of Chicago or Louisville or Sacramento. Preservation Hall demonstrates one such pattern: Standing outside the window, you look across the backs of the musicians to the audience, crowded into folding chairs and onto the floor of the simple space. For a few dollars, you can join the audience inside. You enter through a carriageway to the right of the storefront, pass down it to a door at the back of the room, turn, and sit facing the musicians—and, behind them, the window through which you had looked. You are “in.”

Looking in on a scene with its back to the front, seeing people like yourself beyond the scene looking back at you, finding your way into that scene through an extended passage with a final about-face, seeing the same scene from a privileged position: this scenario is characteristically New Orleanian.

In New Orleans, the great geographical fact is the bending of the Mississippi River. Its curve causes the street grid to bend in fragments reflecting the subdivision of former plantations. The converging streets produce oddly shaped lots.

Wonders appear on the lots that are just big enough to build on: triangular buildings, trapezoidal buildings, and flatirons. Because people as well as geometries often converge at these intersections, commercial enterprises frequently thrive here.

Traditional forms melt into the embrace of the city, echoing the languid curve of the great river. Architects call buildings “sexy” when they catch the eye or show a bit of structural leg. Usually, it is a vague and meaningless term. But if buildings ever were sexy, these are: taut, form fitted, pressing up close to the street.

In the corner store / residence, the floor of the commercial space is but a single step above the sidewalk. At the rear of the store—or restaurant or bar, where the kitchen may serve both business and residence—three more steps lead up to the dwelling.

Both store and house are contained by the single continuous box of the shotgun and held under the continuous gable roof, but a hierarchy of privacy is developed in the economy of the section. (This is the early “suburban”—or should that be “faubourgian”?—variation of the French Quarter’s Creole townhouse, where the residence is literally and directly above the commercial space.)

In New Orleans, people know how to fancy-up for a public event. They know how to embrace visitors, as well. Buildings in New Orleans do these things, too. The front stoop of a shotgun house does. Its gingerbread ornament shapes and celebrates the place where the resident chats with passers-by.

So do the wrought iron galleries of the Quarter. In both cases, resources are spent where they matter: where they bring people together.

The earliest roads in New Orleans paralleled Bayou St John, Bayou Metaire, and Bayou Gentilly, whose banks had been raised above the surrounding swamps by the silt of periodic flooding. Settlement followed the high ground. Farms were established along the bayou roads, where cultivation was possible for a distance of three arpents, or roughly two-hundred yards, from the banks of the bayou. These routes — Bayou Road cutting diagonally across the grid along the route of the old Choctaw portage; Gentilly Boulevard, winding to the east; Metairie Road to the west; and Wisner Boulevard in City Park — remain the sensible lines of habitation between the river and the lake.

A map of southern Louisiana, modified as if sea level were a mere one foot higher than it actually is, suggests the natural form of cities along the lower Mississippi.* Naturally, they are linear. Rebuilt as an essentially linear city, New Orleans could become one of the few cities in North America where light-rail transit actually works.

We might expect denser development uptown in the band between Magazine Street and the river, with nodes of activity at the foot of each of the major radial streets — Jackson, Louisiana, Napoleon, Nashville, and so on. A light-rail route along the existing railroad right-of-way at the river could merge seamlessly into a regional storm evacuation network.

* These maps are derived from more precise maps, based on satellite imagery, developed by Richard Campanella in his extraordinary Time and Place in New Orleans: Past Geographies in the Present Day (Gretna: Pelican Publishing Company, 2002), an essential cultural and topographical reference for the rebuilding of the city.